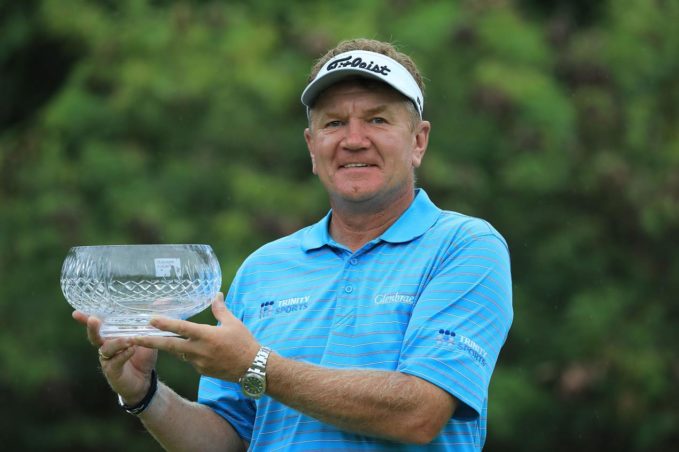 Paul Broadhurst won the John Jacobs Trophy for the second time in three years after topping the Staysure Tour Order of Merit at the conclusion of the 2018 season.

The 53 year old from the West Midlands won his second Senior Major at the KitchenAid Senior PGA Championship at Harbor Shores, Michigan, in May, adding to his Senior Open victory at Carnoustie in 2016.

The 1991 Ryder Cup star now has five Staysure Tour titles to his name, winning the Scottish Senior Open in 2015 and 2017, and 2017 Paris Legends Championship, in addition to his two Senior Majors.

He accumulated earnings of €547,793 across the 2018 season, more than €250,000 ahead of Phillip Price, who rose to second place on the Order of Merit after his runner-up finish in Seychelles.

“To win any Order of Merit is special,” said Broadhurst. “I never came close to winning the European Tour Order of Merit, so to win the Staysure Tour Order of Merit twice in three years is very special. The golf I played at Benton Harbor was probably the best golf I’ve ever played. I did ring my travel agent on the Thursday night to see about flying out on Saturday because I was on the cut line. I then shot five under, then bettered that on Saturday with seven under, and then again on Sunday with eight under. Getting to 20 under par in three rounds on a Major championship course doesn’t happen very often!”

He added: “There’s a bit of pressure with being number one, because everyone is out there to knock you down, but it’s a privilege to get to that position on the Staysure Tour. You can make a career out of senior golf in Europe now, and a lot of that is down to Ryan Howsam at Staysure and David MacLaren at the Tour.”