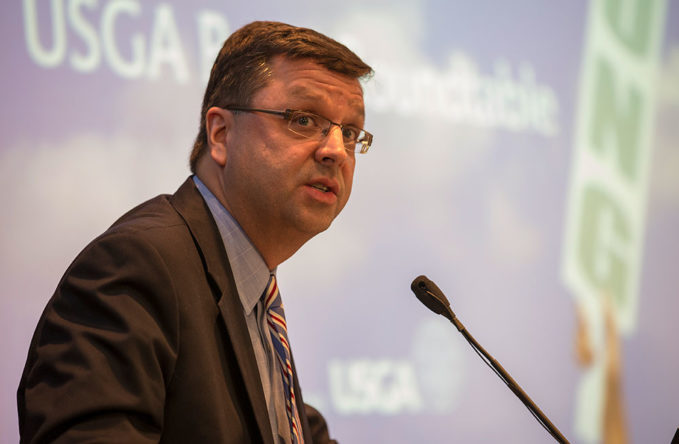 On Tuesday morning, the USGA and R&A announced the launch of a comprehensive project designed to analyze “distance” in the game. A sweeping (if not somewhat vague) directive, the Distance Insights project will, according to USGA spokespeople, seek to analyze data, gather input from “stakeholders” in the game and attempt to come up with some concrete facts about the history of distance as well as some recommendations for the future.

“The topic of increased distance and its effects on the game have been discussed for well over a century,” USGA CEO Mike Davis said in a joint statement from the two governing bodies. “We believe that now is the time to examine this topic through a very wide and long lens, knowing it is critical to the future of the game. We look forward to delving deeply into this topic and learning more, led by doing right by golf, first and foremost.”

Martin Slumbers, the R&A’s chief executive, added: “Distance in golf is a complex issue which is widely debated at all levels of the sport. It is important that we collate all of the relevant data and hear the many different perspectives on this issue that exist in the international golf community. We intend to conduct this process openly, comprehensively and promptly and will work with all of the key stakeholders to ensure we have a fully rounded view of distance and its implications.”

Global Golf Post spoke Tuesday with Rand Jerris, senior managing director of public services for the USGA, regarding the initiative. Here’s what he had to say:

The Post: (Tuesday) morning we got a statement about the creation of this Distance Insights project. But every February for the last several years we’ve gotten distance reports that are a compilation and analysis of distance data. How is this new project different from what we’re already receiving?

Jerris: What you’re getting in the (annual distance report) is what’s been happening at the elite level, five professional tours, for the last 13 years. What we’re talking about here is a much broader project in both interpretation and scope. We will include those who play golf recreationally and we will look at the subject over a broader period of time. Golf has been played in the United States for more than a century. We want to look back at the impact of distance over that entire period and analyze the subject as holistically as we can.

The Post: Everyone’s perspective is based on their own life experiences. For example, there’s nobody left who can tell us what the distance impact was like when the game transitioned from hickory to steel shafts. And there was very little data accumulated at that time. So, how do we have this overarching discussion about distance without a legitimate, verifiable and texted data set?

Jerris: There are various sources of information at which we can look. One is aerial photography thanks to the United States government. We can look at the evolution of the footprints of golf courses around the country over long periods of time, not just in terms of length but in terms of breadth and how much space they’re taking up. Because we can look at the times of those changes, hopefully we can determine what elements of those changes are directly attributable to distance.

The Post: That last point requires a logic leap. Yes, you can see where the footprints of courses have changed over time. But how do you make the leap, based on that evidence, that those changes were attributable to distance?

Jerris: That’s a fair point. The photography will be just one component of the comprehensive data. We will couple that with input from as many external, legitimate sources as we can find. Teachers have been collecting data from their students. Avid golfers have been collecting data about their distance. Then it’s a matter of analysis. That’s where we get all interested parties together and say, “Here’s what we’re seeing in the data. Now, let’s talk about what it means.”

The Post: Going back to the report that we receive in February, the changes in distance have been remarkably small. The incremental increases, and in some cases decreases, surprised a lot of people. A lot of that was confirmation bias. Everyone you see seems to be hitting if farther, so we believe that there must be these huge jumps in distance. But when you look at the data we’ve seen so far, that doesn’t appear to be the case. To launch this program under the aegis that ‘We know distance is an issue,’ doesn’t that fly in the face of the data you’ve already collected and analyzed?

We understand that the numbers we’ve accumulated over the last 13 years have shown various changes. But what we don’t know and what we want to discuss and analyze is: how much of that is due to player conditioning? How much is attributable to technology that allowed swing speeds and ball speeds to get faster? How much is due to agronomic factors? If we can, through data, understand those relative contributions and learn what the limits are, we will be better prepared for the future.

If we ever get the point where we’re going to act, we need to understand what we’re acting upon and what the impact might be (of those actions). Of course, all of that presupposes that, at the end of this period and after all the analysis, we feel, as a community, that there are things that need to be addressed. If that’s the case, we want to make sure that those actions are responsible.

The Post: When you say, “as a community,” the process of community organizing seems a little vague. Are these committees? Will there be meetings? What, exactly, is going to happen?

Jerris: We’re looking at two tranches that will work together. The first is the collection, aggregation and analysis of data. Together with the R&A, we’ll be researching and collecting as comprehensive a data set as we can.

This isn’t opinion driven: we’re asking people, “Given your position as an equipment manufacturer, a tournament official, a coach, a player, a superintendent: what has been the impact of distance? And how do you, as objectively as possible, see distance impacting the game in the future?” We want to listen to those perspectives very carefully.

The Post: A number of your critics, particularly in the manufacturing sector, will say, “This is kabuki theater. They’ve already made up their minds and the ball is going to be rolled back.” What Jack Nicklaus said earlier in the year at the Honda Classic about his conversations with Mike Davis and some of the things that Martin Slumbers has said would certainly lead people to that conclusion. How do you assuage that belief?

Jerris: It will be demonstrated by the thoroughness and comprehensive nature of this project. We are sincere and intentional about this being a broad, inclusive process that will demonstrate that there are no presupposed or predetermined outcomes in play. Because distance has been an emotional and passionate topic of conversation, it’s natural that all of us will have an opinion. But we are very dedicated to the belief that this needs to be open-minded. That’s the only responsible thing to do for the game.

The Post: Has there ever been a committee, a project or a working group that resulted in no action from the USGA or R&A?

Jerris: Well, for starters, there has never been a project this comprehensive. There have certainly been areas of interest notices we have issued that have not led to an equipment change. We have simply collected and analyzed data.

But to be clear, this is not an equipment project. It is far more comprehensive than that.

Column: A Magical Team in a Singular GameEngland breeze to victory over France - Golf News