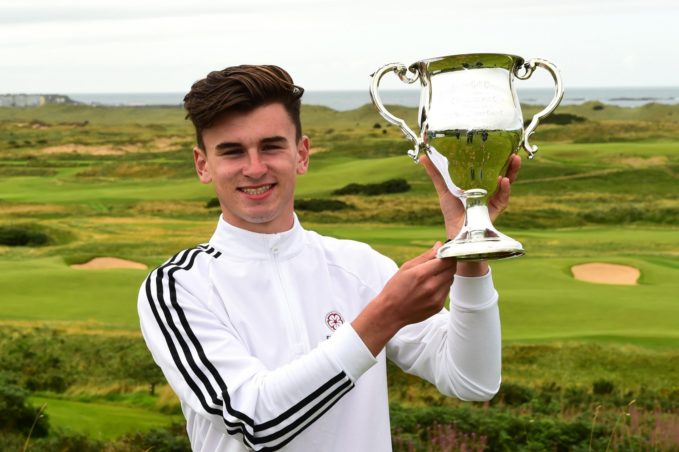 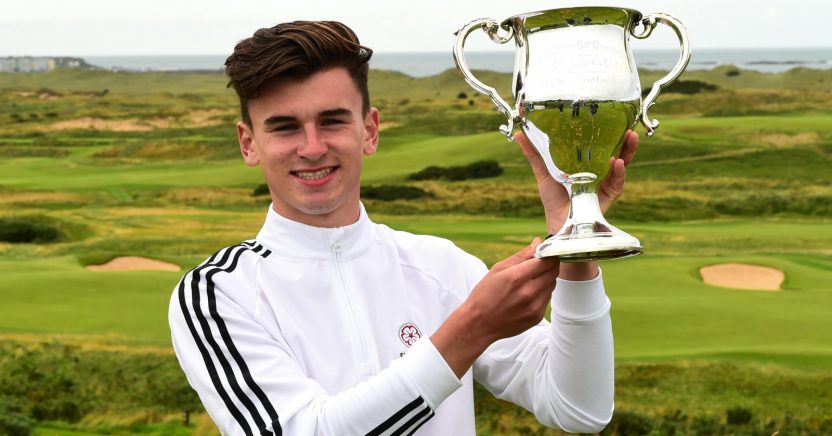 Gough becomes the first Englishman to lift the trophy since Matt Fitzpatrick’s victory at Hollinwell in 2012. He will now play in the Amateur Championship at Portmarnock and The Island, and gains an exemption into Final Qualifying for next year’s Open Champiosnhip, which is also at Royal Portrush.

The 15-year-old from Stoke Park teed off for the second round of the final 2up over Ballester, after a closely contested opening 18 holes of high quality golf. Neither player managed to advance further than a one hole lead until the par-three 16th where Ballester, at one-down, faltered with a bogey. Gough went further ahead thanks to a birdie at the 17th, but the Spaniard hit back on the next to reduce his opponent’s lead to two holes heading into the break.

Gough stumbled in the early stages of the afternoon round with a double bogey at the second, while a bogey next hole enabled Ballester to square the match once more. The lead continued to swing to-and-fro on the front nine, with neither player able to build a commanding lead.

With the crowds building, the key moment came at the par-four 11th. Having watched Ballester roll in a 20ft putt for birdie, Gough stood over his own which rested around 15ft from the pin. Under pressure, he read the line brilliantly and used the break off the left to find the hole.

On the next, both players found the bottom of a steep embankment with their approach shots to the green. Ballester showed his touch to pitch close to the pin from the heavy rough, but Gough went one better as he delighted the crowd by chipping in for eagle and a one-hole lead.

Gough, who already has two wins under his belt this season, having claimed the McGregor Trophy in July and the boys’ title at the Fairhaven Trophy earlier in the year, never looked back from that point and grew in confidence as the match neared its conclusion. He carded another birdie at the par-four 14th to double his lead and required just a half for victory at the 17th.

When Ballester’s tee shot landed in a gorse bush to the left of the fairway, he deemed the ball unplayable and took a penalty drop. Sadly, the young Spaniard’s approach fell just short and found a greenside bunker at which point he conceded the hole, and the match, to the Englishman who completed a memorable 3&1 victory.

Gough said:  “I feel incredible. It’s a dream come true. I never thought it would have happened this year. I knew I was playing well, but I didn’t quite think I’d go this far. Now I’m here the winner, so I’m really happy with myself.

“The turning moment was 11. I made a 15ft putt birdie to stay all-square and then 12 was big for eagle. José was really good. He gave me a very good game and he impressed me quite a lot with his irons – he was hitting it close. I thought I may be picked for the Jacques Léglise Trophy before, but I’m hoping now this has really secured it.”

He added: “I have had an incredible season. I don’t think I‘ve finished outside the top 12 in any competition this year, so I am just playing really well and I’ve managed to keep the form going. Matt Fitzpatrick is a very good person to follow. If I can keep on following in his footsteps, I won’t be doing too badly, and if can win a place at the Open next year, back here at Royal Portrush, that would be another dream come true.”