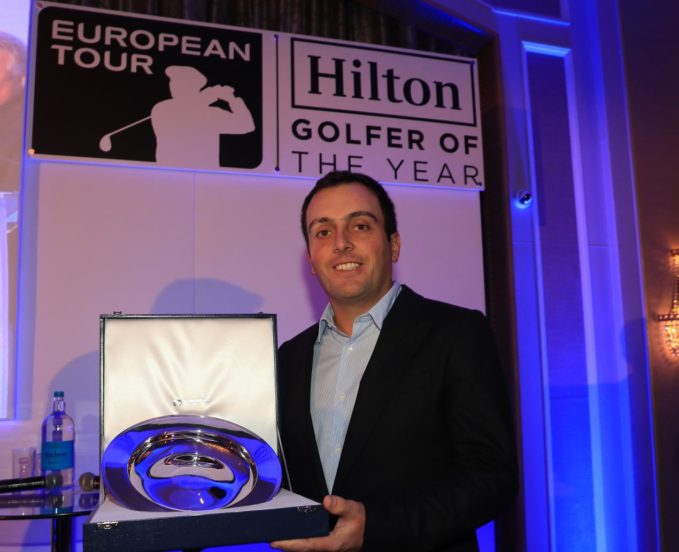 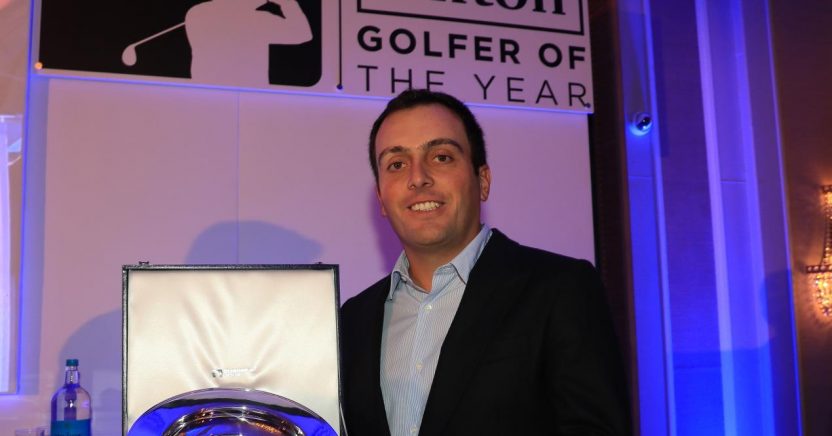 Francesco Molinari, the reigning Open and Race to Dubai champion, has been named as the 2018 Hilton European Tour Golfer of the Year, winning the prestigious annual award for the first time.

A panel comprising members of the golfing media chose Molinari to be the recipient of the distinguished prize following a magnificent 12 months on the European Tour in which he secured a first Rolex Series title in the BMW PGA Championship, a maiden Major victory at The 147th Open Championship and played a starring role in Europe’s Ryder Cup win in France.

Molinari’s first triumph of a memorable 2018 came at Wentworth Club where he finished two shots clear of Rory McIlroy to win the BMW PGA Championship, having finished runner-up in the event 12 months previously. He came close to adding another Rolex Series victory the following week by carding rounds 66-66-66-65 to finish runner-up to his Ryder Cup teammate Thorbjørn Olesen in the Italian Open in his homeland.

The 36 year old Italian’s standout performance in 2018 would come in July, though, where, playing alongside 14-time Major champion Tiger Woods, he held his nerve in tricky conditions at Carnoustie by carding a bogey-free final round of 69 to lift the Claret Jug and become the first Italian to win one of golf’s four Major Championships.

He followed that with another top-ten finish in August at the US PGA Championship, before creating more history in the Ryder Cup the following month, forming a memorable partnership with Tommy Fleetwood en route to becoming the first European to win all five points from his five matches against the United States. Fittingly, it was also Molinari’s victory over Phil Mickelson in the Sunday Singles at Le Golf National which reclaimed the cup for Europe.

Molinari then rounded off a remarkable year by becoming the first Italian to win the Race to Dubai rankings, holding off Masters champion Patrick Reed and 2017 Race to Dubai champion Fleetwood to finish the year as the European Tour’s No.1.

“It is a huge honour to be named the Hilton European Tour Golfer of the Year,” said Molinari, who received the award at the London Hilton on Park Lane on December 10. “So many great names have earned this honour and I feel very proud to join them. It is an award that means a lot to me and is a nice way to end a very special year.”

He added: “Winning at Wentworth, in one of the European Tour’s biggest events, gave me a lot of confidence for the summer, but obviously winning The Open at Carnoustie, becoming my country’s first Major champion, was incredible. To then go on to win the Race to Dubai and be part of that European Ryder Cup team in France was amazing. I’ll always look back on this season and be proud of what happened.”

Keith Pelley, Chief Executive Officer of the European Tour, said: “There is so much to celebrate after another fantastic season on the European Tour which saw so many of our Members excel on the global stage and 12 in particular during a spectacular Ryder Cup in France. But it is right that we pay special tribute to Francesco Molinari who repeatedly made history this year.

“Francesco is not just a phenomenal golfer, he is a wonderful person too and throughout this season he consistently reminded us what a magnificent ambassador he is for our game. He is a thoroughly deserving winner of the 2018 Hilton European Tour Golfer of the Year award.”

Iain Carter, BBC Golf Correspondent, who was part of the judging panel, said: “The list of monthly winners and nominees for this year’s award shows the depth in talent and nationalities on the European Tour. Matt Wallace made a compelling argument with three victories, and Patrick Reed also merited massive consideration after winning the Masters, but Francesco Molinari’s story in 2018 was absolutely outstanding. To win at Wentworth, then lift the Claret Jug at Carnoustie, and then back that up by winning five points at the Ryder Cup, and win the Race to Dubai, is up there as one of the great years in European golf. Francesco has always been one of Europe’s elite players, but in 2018 he became a global superstar and separated himself from his peers.”